Life Returns To LAUTECH After Seven Months Of Inactivity 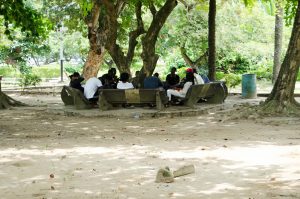 Lively activities return to The Ogbomoso campus of the Ladoke Akintola University of Technology after almost two academic semesters of strike embarked upon by the academic staff of the university putting an end to the agony of students, especially those who were supposed to have been mobilized for the National Youth service Corp scheme.

The two owner states, Oyo and Osun announced the re-opening of the school after contributing N500 million grant and the setting up of a visitation panel headed by Chief Wole Olanipekun SAN to investigate and recommend permanent solution to the problem of industrial action in the school.

Initially, the school chapter of the union had rejected the call to resume works, saying it was not carried along in the bid to return to work and insisting that its members stayed back at home.

However, the ASUU chairman, Biodun Olaniran, confirmed the decision to resume was informed after appraisal of the current situation on campus.

ASUU LAUTECH Chapter suspended its strike after receiving a letter of commitment on how Oyo and Osun state governments intend to fund the university, chapter chairman affirmed.

Meanwhile, Biodun Olaniran further buttressed that they would not hesitate to return to strike if the government refuses to work in line on the promise of funding the school.

“After consideration of all issues, we have decided to immediately suspend the strike and return to work with immediate effect,” he said.

With the current situation, students of the school from Osogbo and other parts of the states trooped to motor parks across the towns returning to school as a result of boredom for over seven months.

Some of the places visited by our correspondents in the school environment showed that student, especially those living in towns close to the community have return to campus and live is beginning to pick up in the school community.

Also, other students from other parts of the country are already on the way to school as the ASUU chairman have pledged its members commitment to return to classrooms immediately.